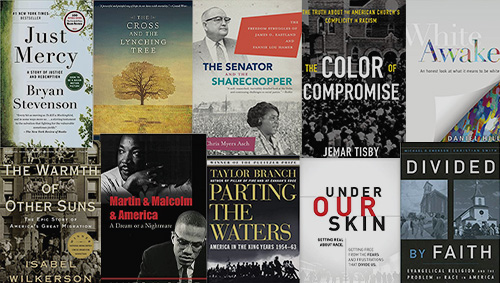 When there is civil unrest and protests in the street, many white people turn to their Black friends. They ask “Why is this happening?” “Why is everyone so angry?” “Will you tell me your experience?” In other words, “Will you educate me and tell me what I missed?”

Those are good questions to ask a friend. But it’s important for us to invest some time and energy educating ourselves instead of solely relying on others. Perhaps, we should pick up a good book to learn about not only the nation’s history but also the church’s history.

There are a lot of good resources available. Here are some of the books that I’ve read over the past few years in my attempt to understand how we ended up where we are.

The Color of Compromise: The Truth about the American Church’s Complicity in Racism by Jemar Tisby

The church has a mixed record on racial issues. Yes, the abolitionists were predominately Christian, as was much of the civil rights movement. But, a large part of the church opposed the same movement. And churches helped institutionalize racism in the decades of Jim Crow. Christians need to learn about the checkered history of the church so that we can better understand why so many people are suspicious of our motives, and so that we can better represent Christ’s love today.

The Cross and the Lynching Tree by James Cone

I was familiar with James Cone but hadn’t read anything by him until a Black pastor suggested his books. My mistake. Thank you, Rev. Dr. Dawson. Cone is the kind of author that hits your head and your heart. I only wish I’d discovered him sooner.

The cross wasn’t just an instrument of killing but also of shaming. There were easier ways to end a life but none as effective as terrorizing a community. Same goes for lynching. The cross and the lynching tree are where the poor and oppressed find common ground.

Martin & Malcom & America: A Dream or a Nightmare by James Cone

Martin Luther King Jr. and Malcom X grew up in different families and subscribed to different faiths. They also advocated different paths to racial justice. Cone puts each man in context, showing how both made significant contributions to the progress of the 1960’s.

The Senator and the Sharecropper: The Freedom Struggles of James O. Eastland and Fannie Lou Hamer by Chris Myers Asch

United States Senator James Eastland and Fannie Lou Hamer lived a few miles apart in the Mississippi Delta. But they were on the opposite side of the power divide. However, Ms. Hamer turned the tables by leading a delegation to the 1964 Democratic convention and facing down President Johnson, Vice-President Humphrey, and FBI Director J. Edgar Hoover. And through her efforts, she brought an end to the Mississippi championed by the senator.

Under Our Skin: Getting Real About Race. Getting Free From the Fears and Frustrations that Divide Us by Benjamin Watson

If you’re new to the subject, this is a good place to start. Watson, former NFL tight end, goes to great lengths to carefully draw in his white readers in order to help them understand how African Americans see the world from a different perspective.

Just Mercy: A Story of Justice and Redemption by Bryan Stevenson

The author is a lawyer dedicated to fighting for legal justice for poor defendants sentenced to death or life imprisonment without adequate legal representation. Some of us like to live under the illusion that the legal system is always impartial and fair. This story reminds us that those without resources often don’t get the same treatment.

Parting of the Waters: America In the King Years 1954-63 by Taylor Branch

This is the first volume in this award-winning historian’s recounting of the Civil Rights movement. It’s a fantastically written story about a heroic movement that isn’t as far in the rearview mirror as you might think.

The New Jim Crow: Mass Incarceration in the Age of Colorblindness by Michelle Alexander

Jim Crow laws, popular between Reconstruction and their overthrow in the Civil Rights movement of the 1960s, legalized racial segregation. Is it possible that the mass incarceration of Black men on relatively minor drug offenses is another form of Jim Crow segregation? At times, this book made political assertions without evidence and identified malicious intent that I didn’t see. But it made me reexamine my assumptions. If you’re looking for your beliefs to be challenged by an intelligent argument, you’ll like this book.

Divided by Faith: Evangelical Religion and the Problem of Race in America by Christian Smith and Michael Emerson

Divided by Faith is written by sociologists who share their research based on thousands of interviews with evangelical Christians. This helps us understand why Black and white Christians see racial issues so differently. Specifically, it helps identify why white, American evangelicals have such a difficult time coming to grips with systemic racism and injustice. Additionally, illustrations in this book led to some “aha” moments for me. I still use them to help others understand the issue.

The Warmth of Other Suns: The Epic Story of America’s Great Migration by Isabel Wilkerson

In a beautifully written book, Ms. Wilkerson uses the true stories of Ida Mae Gladney, George Starling, and Robert Foster to tell the story of how and why 6 million African Americans moved from the south to the north and the west from 1915-1970s.

Are you looking for more book recommendations on race? Check out Emily Pilkington’s 9 Novels about Race and Ethnicity for Young Readers.