20+ Audiobooks for the Whole Family 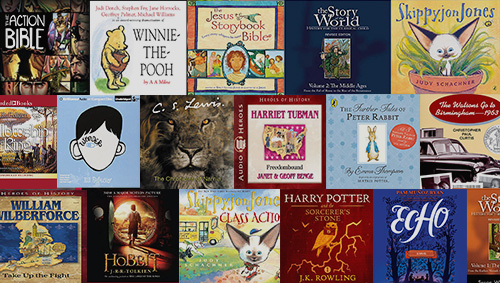 As you set off for a road trip or just sit around the table to work on a puzzle or craft, listening to audiobooks can be one of the best investments of time together as a family.

From entering into exciting stories to seeing the world from a different perspective to growing in your faith, not only are audiobooks a fun shared experience but they are a great way to keep learning throughout the summer.

I’ve compiled a wide range of audiobooks that we, as parents, enjoyed as much as the kids did. You can check out detailed reviews on Common Sense Media to see if these books are appropriate for your child. Please share any of your family favorites in the comments!

Fasten your seatbelts for one of the most creative and fast-paced series of children’s stories you’ll ever listen to. Full of silly songs, a memorable mix of Spanish and English phrases, and a kitten who dreams of being a heroic Chihuahua, you and your kids will giggle and sing your way through these audio books. Each book is about 8 minutes long, but we listened to them over and over again.

The Further Tales of Peter Rabbit by Emma Thompson

If you and your children are familiar with Beatrix Potter’s famous tales of Peter Rabbit and friends, then you’ll enjoy Emma Thompson’s imaginings and narration of even more adventures. A great one to listen to at bedtime.

I’ll never get tired of recommending this children’s Bible for families. Through the aid of British actor David Suchet’s brilliant narration, families will learn of God’s love for his people and how Jesus–God’s greatest gift to us–is at the center of every story. My husband and I often tear up while listening/reading because it is so moving. I highly recommend buying the hard copy, as well, because the illustrations are absolutely beautiful and draw the reader into the story. It is, however, missing quite a few key Bible stories, so it’s important to round this out with some other Bible storybooks.

The Collected Stories of Winnie-the-Pooh by A.A. Milne

Young kids and parents alike will fall in love with this “silly old bear” and laugh out loud at Milne’s clever and downright funny tales of the gang in Hundred-Acre Wood. I was amazed at how much my tweens even appreciated the humor in this timeless classic. Performed by actress Judi Dench and friends, this particular audio edition is top-notch and a pleasure to listen to for all ages.

The Story of the World, Volume 1, Volume 2, Volume 3, and Volume 4  by Susan Wise Bauer

This four-volume series brings history from around the world to life, telling it through engaging, chronological stories. It also includes the biblical narrative from a historical standpoint, which has been helpful in understanding the stories in the Bible in context to the rest of world history. To be honest, I have learned more through these audiobooks than I ever did in school! My oldest son listened to it three times through.

The Action Bible by Doug Mauss and Sergio Cariello

I can’t say enough good things about this Bible, both the hardback version and audio version. Written in the form of a comic book yet faithful to the biblical text, this storybook Bible has engaged my own kids and the elementary children at our church in ways that I’ve never seen before. I like that it hits on the often missing portions of Scripture in children’s Bibles–Judges, the minor prophets, Psalms, etc. Be aware that there are some intense scenes that are portrayed from the Bible (i.e. murder in Judges, Jesus on the cross, etc.) that may be upsetting for some children.

Suggested for 3rd/4th grade and older

When it comes to developing empathy for people who look different than us, you will be hard-pressed to find a more engaging­­ book than this one for elementary and middle school-aged children. The audio version is incredible! This book stirs up an array of topics for discussion with others (especially kids), demands inspection of our own hearts and the prejudices therein, as well as, draws us to consider how kindness can change the world. Be ready to laugh out loud and cry several times. My kids and I sure did.*

*Heads up for parents: I would recommend you listen to or read the book with your children and tweens. There were several things I felt we needed to stop and discuss along the way. Two examples: 1) There was at least one mention in the book of the 9th grade sister kissing her boyfriend. It is brief and not in detail, but I personally felt like I needed to stop the book and discuss dating/relationships as we learned about their young “love”. 2) There are different worldviews presented throughout the book, as the characters respond to Auggie’s suffering. As a Christian, I wanted to make sure my children understood those different views of suffering and what they share in common with and how they are different from the Bible’s view.

Heroes of History: Then and Now by Janet and Geoff Benge

We have enjoyed and learned so much from the biographies in this series. Here are some we’ve enjoyed so far, but there are SO many more to choose from:

Christian Heroes: Then and Now by Janet and Geoff Benge

We have enjoyed biography after biography in this series of famous Christians, too. Here are a few favorites:

An all-time favorite by all ages in our home. My 9 and 11-year-olds just recently listened through this classic series in the afternoons while playing in their room. Once they got started, I would sometimes lose them for hours!

The Hobbit and The Lord of the Rings trilogy by J.R.R. Tolkien

We have been listening to these exciting classics as a family at night before bedtime. Although your kids have to be willing to sit through some rather long descriptive portions and mythic songs, the story and characters are unparalleled, in my humble opinion. It was a tough sell at first but now my children ask us to turn it on at night. Note: There is also an abridged dramatized version of these books, if you want a shorter edition. I’ve heard good things about the dramatized versions.

Did you know the Bible can be even more interesting just by the way it’s read aloud? Actor David Suchet has the amazing talent to bring God’s Word to life through his voice. Our family has been listening for just a few minutes each morning and then discussing what we hear. An enjoyable way for the whole family to listen through the whole Bible!

More suggested audiobooks for elementary or tween kids based on books we’ve enjoyed:

Looking for more fun ideas on how to make the most of summer with kids? Read these 3 Tips for an Intentional Summer with Your Kids.