God-Ordained Genocide? Making Sense of the Invasion of Canaan 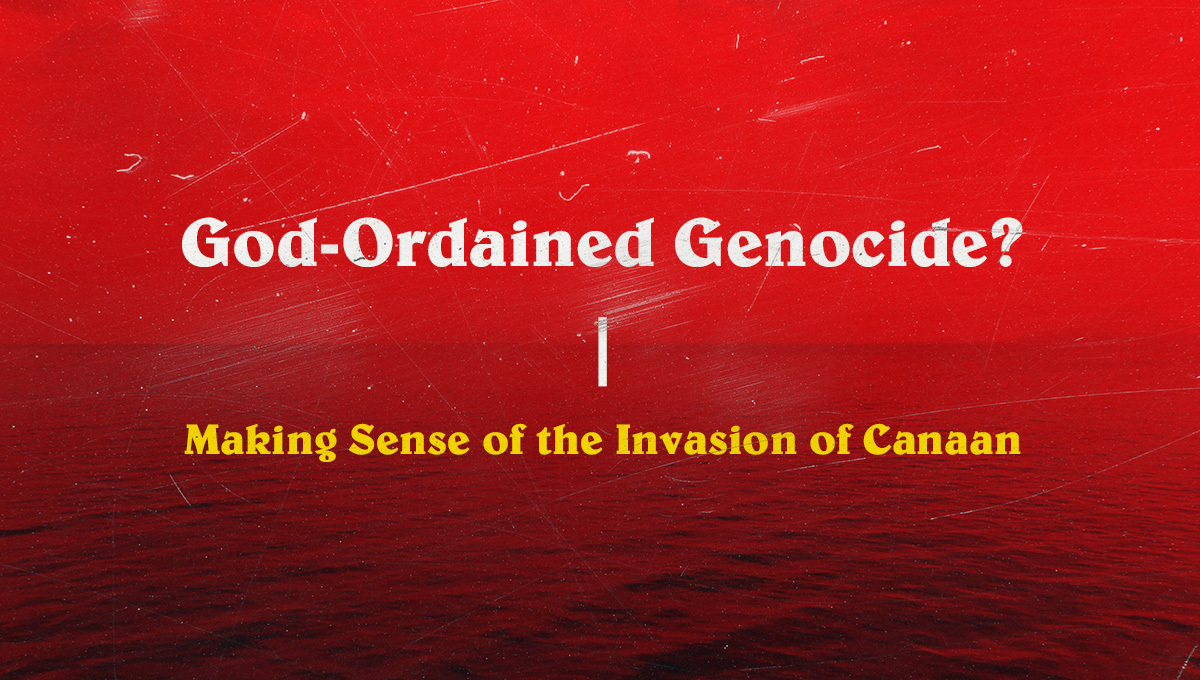 The conquest of the Canaanites in the book of Joshua is among the most challenging passages in the Bible for modern readers. It’s also one that we’re not typically equipped to understand at first glance. Most readers imagine that God commissioned his nation to vengefully wipe out an entire nation of Canaanite men, women, and children.

However, a deeper reading reveals that the reasons for the conquest were more complex, the scope of the destruction was smaller, and God’s mercy was present throughout.

Let’s start with what’s hard about this story.

Even a cursory reading of Joshua can provoke questions that leave us confused, angry, and perhaps even ready to give up on the Bible and on God.

Why would a good God send his people to take land that belongs to another nation? Is this just one more example of people using religion to justify violence and conquest? My god is telling me to take your land, so here I come! If Jesus says to love your enemies, why does God declare war on them in the Old Testament?

Who Were the Canaanites, Really?

Of course, not all the Canaanites were evil, but when you learn more about the corrupt practices of their culture, it is hard not to cast them as the “bad guys.”

The Bible paints a pretty grim picture of Canaanite practices. Leviticus and Deuteronomy contain detailed and lurid lists including the worship of demonic idols, taboo sexual acts, and even the sacrifice of children to the Canaanite gods.

God makes it clear to the Israelites that it is “not because of your righteousness or your integrity that you are going in to take possession of their land, but on account of the wickedness of these nations…” (Deuteronomy 9:5).

Israel’s mission was clear: They were not to be influenced by the Canaanites’ wicked practices and the cultural systems that fostered and endorsed them.

The Motivation of the Conquest

Given that mission, let’s talk about the misguided idea that Joshua and the Israelites were motivated by the act of killing a people group.

The conquest wasn’t about ending Canaanite lives. Instead, it was about ending the Canaanites’ corrupt religious and cultural practices. The problem wasn’t the people, but idolatry.

In The Lost World of the Israelite Conquest, John Walton suggests that the point of Israel’s invasion was more about the dismantling of the community of which the Canaanites were a part than ending their lives. It could be compared to what the Allies set out to do during World War II. They were on a mission to end the Nazi regime, but that didn’t mean they had to kill every German.

So that’s the why of the conquest, but what about the how? It turns out there’s a whole lot more going on with these battle stories than most modern readers expect.

What Do We Need to Know About These Battles?

If we are imagining Jericho (Israel’s first battle in Canaan) as a sprawling ancient city full of schools, businesses, and homes, its destruction provokes a certain natural reaction in us. But as Joshua Ryan Butler explains in his book The Skeletons in God’s Closet, that might not be the best way to envision what is happening.

“The cities Israel takes out are military strongholds, not civilian population centers... So when Israel ‘utterly destroys’ a city like Jericho or Ai, we should picture a military fort being taken over–not a civilian massacre. God is pulling down the Great Wall of China, not demolishing Beijing. Israel is taking out the Pentagon, not New York City.”

Not Everything Was Fair Game

The saying “all is fair in love and war” does not apply to the conquest of Canaan.

God put firm boundaries on the extent of the conquest, and several of the tribes in the region were not to be harmed at all (Deuteronomy 2). God also put a time boundary on the conquest (Deuteronomy 7:22). This wasn’t an instant takeover—the conquest was to take a long time. God told them that he would drive the people out slowly over time.

Furthermore, the offer of peace was always available, but most of the Canaanites didn’t take it. Deuteronomy 20 lays out the rules of warfare for the Israelite nation, a sort of ancient Geneva Convention. In that passage, God instructs Israel to offer terms of peace to their enemies before a battle. The book of Joshua doesn’t include detailed accounts of the offers of peace, but Joshua 11:19 indicates that the offer was made and consistently refused. “There was not a city that made peace with the people of Israel except the Hivites, the inhabitants of Gibeon.”

Driving Out, Not Destroying

Much of the language of the conquest picks up the language of “driving out” and dispossessing (Exodus 23:27-30), which is a different focus than killing and conquering. This is the language of exile, not destruction. The conquest wasn’t a massacre, it was a dismantling of a dark cultural regime. In fact, only three fortresses were totally destroyed: Jericho, Ai, and Hazor (Joshua 6:24, 8:28, 11:13).

As modern people, we expect a level of journalistic accuracy when it comes to historical accounts, but ancient cultures had a different understanding of things. In ancient battle narratives, the exploits of the protagonists are often inflated for literary effect.

So, the vivid language of the conquest makes it seem like God’s instructions to Israel go way beyond what we might think of as “normal” warfare. However, the key to understanding them often lies in understanding the context out of which they came.

For example, on one Egyptian tablet, Pharaoh Merneptah boasted of his military exploits with the line: “Israel is laid waste and his seed is not” (~1200 BCE). However, as we know, Israel was never wiped out by Egypt. The language was hyperbolic trash-talk. The book of Joshua observes the same conventions of exaggeration when it describes the scope and intensity of the conquest.

Finding Jesus in the Conquest

Though the conquest remains a difficult section of scripture for many reasons, I hope a clearer picture of the context and the scope of the conquest helps ease some of the tension you might feel when reading these passages.

However, the point of reading the Bible isn’t to look for ways to square it with modern ethics or even to answer all our questions. The story the Bible tells is about God’s mission to restore his rebellious creation and bring all of humanity back to himself through Jesus. Every part of the story points toward this great narrative arc of redemption, even the conquest of Canaan.

The Prince of Peace

If the hostile, tribalistic, violent hype of the conquest was the best understanding we had of God’s character, we would expect more of the same when, centuries later, that God took on flesh and came to earth.

Jesus was born into a poor family and oppressed by the Roman empire. And he knew what it meant to be marginalized and outcast. In his ministry, he rejected violence as a means to establish his kingdom (Matthew 26:51-56). He crossed tribal, ethnic, and cultural boundaries in his offer of love and grace, even to Canaanites (Matthew 15:22).

The Prince of Peace suffered a violent death at the hands of violent men and revealed God’s true heart when—though he had the power to use violence to protect himself—he suffered on the behalf of the very people who were murdering him.

In Christ, God himself suffered violence so that violence might end forever.

Like Joshua, Jesus came to drive evil out of creation. But unlike Joshua, Jesus’s weapons were wisdom, love, and sacrifice. In the book of Joshua, God was triumphant in Canaan despite the death and violence of battle. In Jesus, God triumphed over death itself because of the violence he endured. Joshua bought victory at the expense of his enemy’s blood, but Jesus bought victory for his enemies through the shedding of his own blood.

The conquest is not the evidence of a strange divide between the Old Testament (and its angry God) and the New Testament. Rather, Joshua points to Jesus, the true conqueror, who announces an alternate kingdom in the midst of ruling powers of evil. He is the king whose reign ushers in an eternal kingdom of peace for all creation, more fully than Joshua’s battles against evil ever could.

Want to dig deeper into understanding the story of Joshua and how a good God can allow violence? Patrick Miller explains how Joshua's conquest is different than the Taliban in this episode of Ten Minute Bible Talks.