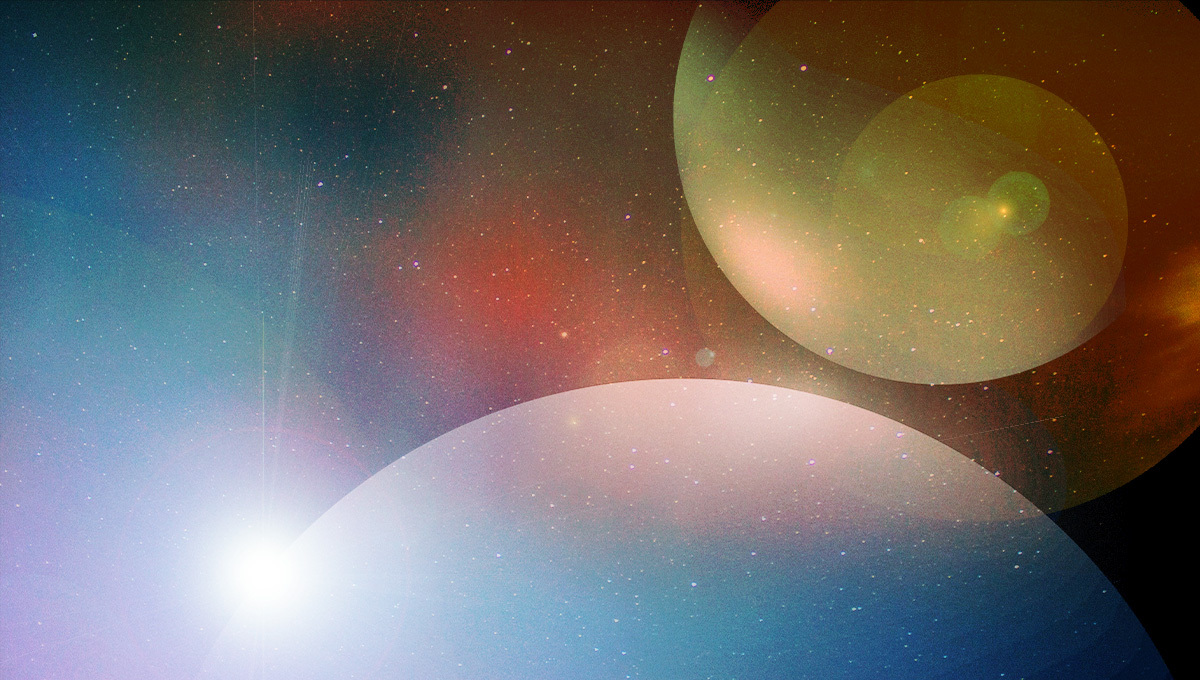 It is better to live naked in truth than clothed in fantasy.
—Brennan Manning

“Do you feel the world is broken? Do you feel the shadows deepen? Do you know that all the dark can’t stop the light from getting through? Do you wish that you could see it all made new?” The poignant opening questions to Andrew Peterson’s modern hymn “Is He Worthy?” tug at the core of our hearts and beg a simple answer: “We do”.

Suffering is either nipping at our heels, or it has taken up residence in our home. We no longer live in a fantasy that the world is everything that it should—or could—be. We are east of Eden. The naked truth is that we live in a world at war, and we simply cannot make sense of our reality until we embrace this fact.

The Worst Decision Ever Made

We’ve all made foolish decisions, but none can compare to the tragic choices recorded in Genesis 3. The setup of Genesis 1 and 2 is too good to be true: a lush paradise filled with organic fruits and vegetables, comfortable temperatures, and deep, sustained relational intimacy. This ideal arrangement for human life and relationships to flourish is declared “good” by the Creator, the material and spiritual realms are in harmony, and the world is operating with purpose, order, and beauty.

Adam and Eve had access to all the pleasure and enjoyment that the Garden had to offer except for one tree that God said was off-limits. They were placed in Shalom—they were whole, complete, and at peace with each other and God.

This exposition makes the catastrophic fall of humanity even more baffling and perplexing.

What was so compelling about one piece of forbidden fruit that it was used to persuade a person to disobey God’s clear commands? This single decision set off a cascade of consequences that ultimately resulted in the atrocities of death, disease, war, famine, racism, human trafficking, slavery, corruption, rape, murder, and more.

If under the best of circumstances, Eve was susceptible to deception, rationalization, and open rebellion with devastating results, then an examination of the fall may provide a window into your own heart, too.

Because of the pervasiveness of sin, shattered shalom has shaped your life story.

My awareness of this truth dawned when I spent a summer at church camp in my youth. Amidst the delight of camp activities like archery, pottery, and swimming, the lighthearted mood suddenly shifted when word spread that two camp counselors had taken an unauthorized boat ride on the lake. As panic and fear ensued, I intuitively sensed that the fun of camp was over. By day’s end, the chapel, typically used for joyful singing, had turned into a place of mourning. The boys hadn’t worn life jackets, and their inexperience ended with one of them drowning as his friend watched helplessly while he struggled, then slipped below the surface of the water.

My mind had to create a new and unwelcome category: death and grief.

When did you first notice that the world was broken?

That’s a heavy question but warrants personal reflection because it’s different for everyone. Is there a particular scene of heartache that comes to mind?

Safety and Security Have Been Erased

As we engage our story, we must recognize that shalom has been shattered, and we are on a journey to get it back.

The result of the shattering means that a sense of safety and belonging has been erased. As a result, we’ve developed ways to cope with our brokenness in an attempt restore that security and control. We are fragile and finite. But instead of humble dependence on our loving Creator, we fashion substitute gods with our hands, believing they will fill the God-sized hole in our hearts.

The impact of sin entering the world was dynamic and progressive. Much like a mutating virus that attacks at the cellular level, sin has wiped out the “hard drive” of our hearts that connected us to our Creator, and we have lost all sense of safety and trust.

Born under the curse of sin, we are infected by its corrosive nature. We believe that God is not good and that he can’t be trusted, and the compass of our lives is now oriented around the internal deception that we are the center of the universe. We strive for power, live in the lusts of the flesh, and indulge our sinful desires (Ephesians 2:3).

Sin is woven into the fabric of our stories and has set us up for deep emotional, psychological, and spiritual crippling.

The Enemy of Your Soul

If dealing with the sin virus wasn’t bad enough—there is an even greater dynamic to consider. Adam and Eve’s “worst decision ever” was incited by a creature whose very nature opposes God. The serpent approached Eve and deceived her by twisting God’s words and distorting reality. This planted a seed of doubt in Eve’s brain—she questions whether God really had her best intention in mind.

The serpent’s lies were believable enough to convince Adam and Eve that they would have a more sublime “spiritual awakening” if they ate the fruit of the tree. Little did they know the serpent had evil motives: he desired their death and destruction.

Generations later, we find ourselves born into a war we didn’t ask for, and we’ve awakened with a terrible case of spiritual amnesia.

We have been lied to, deceived, and are actively under attack from “our adversary, the devil, [who] prowls around like a roaring lion, seeking someone to devour” (1 Peter 5:8). The sin virus has mutated, multiplying the world’s brokenness. We are ensnared and entangled by sin, stumbling around in spiritual darkness.

Evil forces aim to steal every opportunity you have to experience the goodness of God. They want to kill the desires of your heart. The beauty of your face and the unique way you represent God’s image are under targeted attack. The war isn’t out there-- it’s in your heart and mind. And it presents itself early in your life story in a moment of heartache or pain.

Shattered shalom is more than an event in time. It is the backdrop of an epic battle for your soul, and there is no neutral ground.

Tactics of the Enemy

Evil is not creative. It can’t make anything new. So, it works to corrupt what already exists.

Nature and nurture, biology and environment, brain development and social experiences… everything is fair game to the enemy. He studies you to exploit your weaknesses, capitalize on your wounds, and disrupt any sense you have of God’s goodness and love. Evil knows your name and is committed to destroying faith, hope, and love. And it’s been working against you since birth.

Engaging your story is nothing short of spiritual warfare—it names the enemy’s tactics, intentions, and desires for you.

The evil one operates by:

Deceiving - Causing someone to accept as true or valid something that is not true through trickery or lying. It literally means to “capture the truth” from someone. This results in disorientation and an inversion of good and evil.

Dividing – Creating a wedge in something that was previously whole, causing separation and isolation (primarily in relationships).

Discouraging – Convincing someone that life is purposeless, meaningless, and hopeless, causing emotional and spiritual distress and despondency.

Defiling – Polluting something of beauty by degrading its inherent value and making it impure, producing shame and humiliation.

Destroying – Annihilating someone’s existence, bringing down by force, resulting in the ruination of conscience and personhood.

Where have you seen the enemy deploy these tactics in your own story?

Take some time to reflect on situations where you’ve noticed these strategies in the specific details of your life.

A True Picture of Self

The culmination of these assaults from the enemy ultimately impacts our identity formation (though how is different for everyone).

A seed planted in the ground needs sunlight, water, and nourishment. A tree will be stunted if cut off from these life-sustaining elements, diverted from its path to health and flourishing. Worse yet, it may be forever misshapen if trampled down, split apart, or obstructed in its growth.

In a similar way, as your personal identity progresses in developmental stages, living in a fallen world means that you’ll be shaped by the ingredients you receive as well as those you don’t.

Being born under the curse of sin means that none of us fully experience the basic needs of being Seen, Safe, Soothed, and Secure. In fact, it may mean that tragedy or harm has befallen us in unspeakable ways, preventing us from receiving such care.

When you allow yourself to name and acknowledge the truth of how you have been shattered or broken by sin, you are doing battle against the enemy of your soul.

The pain of living in a fallen world must be transformed by the mercy, love, and riches of “God’s grace in kindness toward us in Christ Jesus” (Ephesians 2:7). As we grow in spiritual intelligence about how evil works against us, we understand who our battle is really against. Yes, people have harmed us in particular ways. Still, our struggle is “not against flesh and blood, but against the rulers, against the powers, against the world forces of this darkness, against the spiritual forces of wickedness in the heavenly places” (Ephesians 6:12).

The Diagnosis is the Cure

By correctly diagnosing and acknowledging your plight, you step onto the path of redemption and restoration—what man intends for evil, God intends for good. (Genesis 50:20)

The trajectory of your identity formation changes as soon as God enters your story, for when we were “dead in our transgressions,” he “made us alive together with Christ” (Ephesians 2:5). The curse of sin is broken, evil is disrupted by his fatherly rescue plan, and we know that Jesus has all things subject under his feet.

Yes, shalom has been shattered, but the story isn’t over yet. A Savior has come to make all things new, including your identity.

Next time, we will look at a curious stage in our development: Splitting. A high-level defense mechanism, splitting occurs when shame takes root, and we don’t know what to do with the bad feelings it produces. Understanding this third stage of identity formation may shed light on parts of your heart that have been in hiding for a long time, so you don’t want to miss learning about it.

Don’t miss Between Two Identities: Starting Your Self-Exploration at the Beginning, where we considered the first stage of identity formation: Set-Up.